An autism and hair testing study of 1,967 autistic children from age 0 to fifteen years of age, the clinical results found deficiencies of zinc and magnesium in the entire group which was more significant in children from the 0 to three year age group. Other studies conclude that “infantile zinc and magnesium deficiency and or/toxic metal burdens may be critical and induce epigenetic alterations in the genes and genetic regulation mechanisms of neurodevelopment in autistic children.”

Download this Article on Autism and Hair Testing, February 2017 (PDF)

The National Institute of Neurological Disorders and Stroke describe Autism Spectrum Disorder (ASD) as a group of complex neurodevelopment disorders characterized by various patterns of behavior ranging from mild to severe. Some individuals with ASD do perform normally in daily life while others suffer from complete disability.  https://www.ninds.nih.gov/Disorders/All­Disorders/Autism­Spectrum­Disorder­Information­Page

Statistics from the Autism Society state that approximately one percent of the world population has (ASD) and the Centers for Disease Control and Prevention (CDC) estimates the condition occurs in about one in sixty­eight births. Theories of causation range from genetics to environmental factors, or a combination of both, but is more common in premature births. For some reason it appears that ASD affects more males than females at a rate of approximately five to one.

Figure 1 shows hair tissue mineral analysis (HTMA) studies submitted to TEI of individuals diagnosed with ASD. The chart consists of over 2300 individuals of all ages and both sex. The results from the HTMA studies show the higher incidence of the condition occurring in males compared to females. 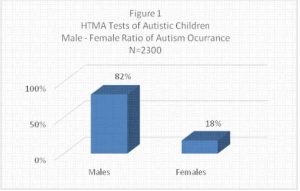 Hair samples submitted to TEI for testing include a compilation of both domestic and international groups. Severity of the children affected were not ascertained, but include mild to severe forms of ASD. Further analysis of the HTMA results also reveal the metabolic characteristics. Figure 2 shows the percentage of total samples relative to sympathetic and parasympathetic mineral patterns as recognized by TEI. 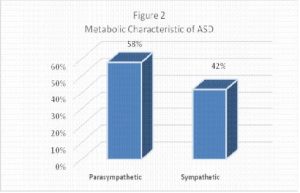 Further, figure  3 shows the metabolic characteristics of the  female  group diagnosed  with  ASD.  The  majority  fall within the Parasympathetic category.

Metabolic characteristics of the HTMA patterns of males are shown in figure 4. It appears Sympathetic types are significantly more common in  males compared to females by almost double. 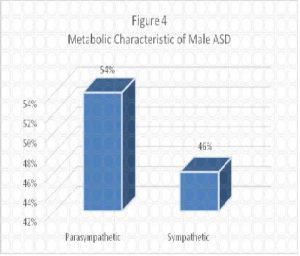 Often, children and adults suffering with autism have coexisting health conditions that are overlooked or overshadowed by their ASD diagnosis. Manifestations of aggression, anxiety, and irritability, self­-harming activity such as head banging, sleep, digestive disorder and over ­sensitivity of visual, tactile  and  auditory senses are frequently attributed to the ASD diagnosis but in many cases these behaviors can be a result of an underlying health problem. Researchers are  finding that many of these symptoms can be due to allergies, IBS, inflammation or pain. In the publication, Medical Comorbidities in Autism Spectrum Disorders, the authors site many examples of children diagnosed with ASD  whose  behavior  improved  dramatically following treatment of their underlying health conditions. Conditions of some of the cases studied ranged from ear infections causing blocked Eustachian tubes resulting in repeated jaw ­striking and jumping apparently in an effort to unblock his ears. Treatment with antibiotics lead to a marked, prolonged improvement. Other examples include removal of a child’s tonsils that lead to improvement in moods and aggressive behavior. A child who experienced severe regression and food restriction improved dramatically following treatment of his severe constipation.

Researchers have also found autonomic nervous system dysfunction in many patients with ASD. Specifically, an elevated sympathetic to parasympathetic activity. Sympathetic dominance may explain the high prevalence of ASD occurrence in males compared to females. As can be seen in the statistical data, more males show a sympathetic mineral pattern compared to females. This may also account for visual, auditory and tactile hypersensitivity and may also be a factor in contributing to signs of mitochondrial dysfunction in many children and adults with ASD. Notable findings include increased blood lactate, pyruvate and alanine levels.

Typically excessive sympathetic nervous  system activity also increases cellular glycolytic activity with an increased production of pyruvic acid. Normally pyruvic acid is dehydrogenated to form acetyl CoA for normal cellular respiration in the citric acid cycle. However, when either excessive amounts of pyruvates are present in the cytoplasm or there is a blockage or marked reduction in the function of the citric acid cycle, the extra pyruvic acid forms alanine and lactic acid.

A study by Yasuda and Tsutsul, (2013) in the International Journal of Environmental Research and Public Health reported the results of HTMA studies from 1,967 autistic children 0 to fifteen years of age. Their results found deficiencies of zinc and magnesium in the entire group which was more significant in children from the 0 to three year age group. Although the TEI study included all ages including adults, we also found a trend toward low magnesium. The median magnesium level in males were approximately sixty percent below the mean, while females were fifty percent below the mean. Although we did not find zinc levels to be extremely low, we did find that the zinc/copper ratio average was significantly reduced from the ideal of 8:1 down to 4.6 in males and 3.9 in females indicating a relative zinc deficiency or increased zinc requirements. We also found low sodium/potassium ratios as well as low calcium/potassium ratios in both males and females.