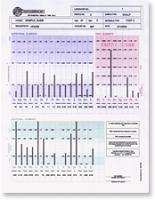 The sodium to magnesium ratio is a measurement  of energy output because the adrenal glands are a major regulator along with the thyroid gland of the rate of metabolism.

The sodium to potassium  (Na/Mg) is a tissue reading and will often not match blood tests for adrenal hormones. Usually the blood test will be normal but the tissue mineral reveal abnormal adrenal function. Symptoms usually correlate well with hair analysis.

Sodium levels can be elevated by cadmium, mercury, copper, iron, manganese and nickel. An excess of these minerals effects the sodium tissue level temporarily so adrenal function may actually be slow. In HTMA testing and analysis, we always look at every HTMA chart for the presence of these metals when evaluating the adrenal ratio. Rarely, magnesium or even sodium may be lost through the hair, causing a false reading.

Symptoms Of Under active Adrenal Glands Include:

Symptoms Of Overactive Adrenal Glands Include:

Trends Associated with the Sodium To Magnesium (Na/Mg) Ratio: