In addition to hair testing (HTMA) we also offer the latest technology for  neurotransmitter testing through ZRT Laboratory.  Order the NeuroAdvanced Profile. 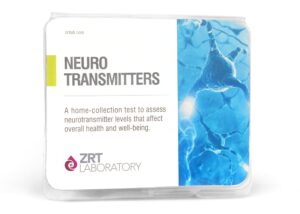 ZRT Laboratory is the only lab to offer a 24-hour equivalent in four easy collections – resulting in a more accurate assessment of individual neurochemistry.  Download neurotransmitter testing instructions.

Most Convenient Method For Neurotransmitter Testing Using Urine Testing
ZRT Labortory’s dried urine method offers a discreet, at-home testing alternative and eliminates the hassles of all-day jug urine collection. Patients collect urine on a filter strip up to four times during the day. Dried strips are shelf-stable for 30 days and easy to mail back to the lab for analysis.

About Neurotransmitters
Neurotransmitters are chemical messengers used by the nervous system to relay information from one nerve to another. Optimal neurotransmitter balance is required to maintain proper health. Imbalances can cause the brain and the body to be over- or under-stimulated, producing neurological or psychological symptoms.

In the neurological system, hormones are synergistic with neurotransmitters – modulating their production, signaling and metabolism. Because of this complex interplay, testing hormones and neurotransmitters together is an ideal way to generate a more precise clinical assessment.

This combined testing gives Practitioners a diagnostic edge over the traditional psychological inventory and offers the advantage of zeroing in on which therapies are best suited for individual patients – cutting down on the time-consuming process of trial-and-error for identifying treatment options.

Heavy metals are damaging to brain health. They disrupt neurotransmitter function and create oxidative stress that is detrimental to nerve cells, contributing to mood disorders, poor memory and dementia. Identifying exposure to heavy metals may be key to assessing and treating mood disorders and preventing neurodegenerative diseases.

In contrast, nutritional elements are generally protective for brain health. Lithium acts directly on the brain by slowing the progression of dementia and stabilizing mood, while elements like iodine and selenium act indirectly by supporting healthy thyroid and brain function.

NeuroAdvanced Profile includes the following 15 neurotransmitters which are easily obtained at home from a dried urine samples obtained using the test kit provided: